After the whirlwind journey of our OMOD showcase in Austin, we hit the road to do the same thing in Houston. (Read all about Austin in Part 1 here!) Despite our hopes for an early departure last Friday (the 13th, as it turned out), we arrived at the Alley Theatre with only 15 minutes to spare before our rehearsal was set to begin. Houston welcomed us, as always, with traffic, a feud with our GPS, and massive, many-lane freeways we had to cross instantaneously to reach our exits.

Soon, the other van from Austin carrying Celia, Chris, Jennifer, and Adrianna arrived, the participants from our Houston program filtered in, and we began acquainting ourselves with the beautiful Alley Theatre Texas Room, running through the blocking of the showcase, and offering notes to each performer on how to best make their stories come alive. As in Austin, we were tremendously thankful to have Chris Strickling of Actual Lives fame on our team, and she, along with Alex, our Houston facilitator, Celia, and Nicole, worked wonders to bring out everyone’s best performances yet. We wrapped up the rehearsal at 8pm and returned to our hotel for a desperately needed dinner and glass of wine (or two). By the time I collided with my bed, I was out like a light. 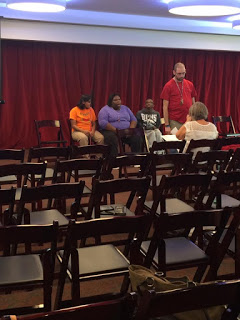 Chris coaches Adam on his speech during rehearsal.

The next day we all met at the Alley Theatre at noon, and soon after, the wave of stress that normally precedes a big showcase impacted us like a speeding train. I remember looking over the Texas Room at the fury of activity – participants practicing speeches before coaches, Alley Theatre employees arranging paperwork, ice water, and plastic cups on a table by the door, my attendant Nic gaffer-taping mic cables to the floor with the lightning speed and precision of someone with ample experience on film sets – and thinking, “there’s no way we’re going to be ready in time.” Of course, I was wrong, and each heart-dropping problem was solved swiftly and intelligently. 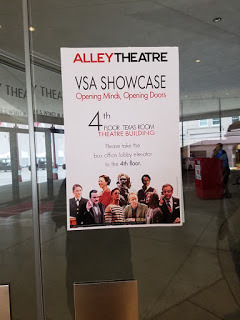 A sign in the lobby of the Alley Theatre directs
audience members to our showcase in the Texas Room.

The showcase itself was certainly not free of bumps – the immediate failure of the lavalier mic mirrored a collision of wheelchairs at the start of the Austin showcase just a week before – but even so, the stories were simply too good to fail, and besides, what in life doesn’t involve a bump or two? The unflinching demeanor of the participants in the face of each technical hurdle also reflected their impressive growth in the past six months as well as their confidence in their stories and their speaking ability. Every story resonated with humor, humanity, and the unique personality of the speaker telling it.

Special thanks to our friends at the Alley Theatre and Theatre Under the Stars, but more specifically Mary Sutton, Mara McGhee, Eileen Edmonds, and David Oliver, for their crucial support of our Houston program and making this all possible. Thanks also to our facilitators, staff, and other assistants including Alex Odom, Chris Strickling, Celia Hughes, Nicole Cortichiato, and Una Lau. Finally, a big congratulations is in order for all of our Houston and Austin speakers who gave excellent performances across the board. It was a wonderful honor to work with all of you, and I look forward to see what you all accomplish next! 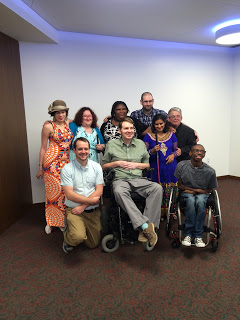 The OMOD crew poses for a photo after the showcase.
From left to right: Adrianna, Alex, Jennifer, Veronica,
myself, Adam, Alisha, Russell, and John.